It all started when... 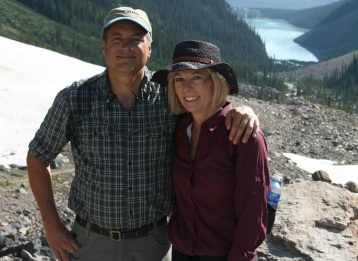 ...Collin and Marisa Fay went to Australia for their honeymoon.  There, they enjoyed a two-week, group flying tour and became intrigued with the idea of bringing something similar to the western USA.  At the time, they were working overseas in Uruguay in the mining business. As soon as the contract ended, they relocated to Colorado where they began putting together the pieces of Parkwest Air Tours.

Parkwest offered two tours in the summer of 2000, and consistently built up the business from there.  From a height of 8 tours/season, the Fays have slowed it back down to just a small handful of offerings, allowing time for other flying pursuits.

In addition to being a Professional Engineer and holding an MBA, Collin is a ATP-Land and Sea, CFI, CFI-I, and MEI.  After several years flying air tankers in the aerial firefighting world, Collin retired in 2022.  Marisa is a private pilot, passionate hospice volunteer and advocate for the elderly.  She loves building tours and friendships through Parkwest, and looks forward to doing so long into the future.